These are small terracotta caves measure 2 inch wide by 1 inch tall. Great for Apistogrammas, Kribensis, Kuhli loaches, shrimp, small plecos and more. Use caution with fish like Clown loaches who like to wedge themselves into tight places.

These are small terracotta caves measure 2 inch wide by 1 inch tall. Great for Apistogrammas, Kribensis, Kuhli loaches, shrimp, small plecos and more. Use caution with fish like Clown loaches who like to wedge themselves into tight places.

I have a pair of double red apistogramma and they were breeding. The problem? They were doing so in a community tank and the fry weren’t making it. So I bought this and was shocked at how tiny it is. The female that is small instinctually went in there and spawned again leaving me with close to 60 wrigglers. That batch produced about 16 fry that are growing out right now. Yes, it is small. I promise it’s going to be smaller than you expect. I took it out of the box and said “wtf?” But whether or not it is intended for this purpose, it keeps other fish out. Really great product that’ll pay for itself several times over should I sell the fry! 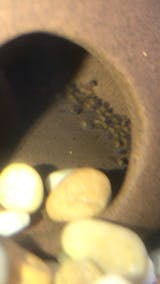 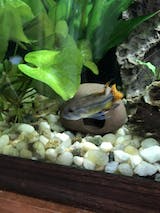 A lot of my apistos dont fit in these caves..good construction and all but should be a little bigger in every aspect

hard to image size. Even though its in the description. Very small cave. Great shape and look. Wish it came a little bit bigger. Maybe in a small, medium, large options.

G
G.
A little small but

Its smaller than I thought it would be but my betta can fit in with ease! A king male would be too big to fit though.

Nice addition to my shrimp tank

Nice cave, i covered it with moss and dug it down into the sand, the female has been checking it out hopefully see some spawning soon

I use this in my Peacock Gudgeon tank along with some other small tube shaped hides. The Gudgeons laid eggs in it within a week of putting it in so appears they like it.

Nice little cave. My apistos can’t decide between this cave, the coconut hut, and the pleco cave!

The cave is small and very cute. All though I don’t have apistogrammas, I do have other small cave dwelling fish that enjoy it.